Ficto-Memoir is a house term coined to describe our bestseller,

BASEBALL KARMA AND THE CONSTITUTION BLUES

Ad Lib Pub  offers the finest BOOKS for your virtual and IRL consumption.

“I don’t know if it’s you guys [the media] or the players or what, but somebody out there has got something against us. Or somebody’s not living right. If you guys are very religious, please go to church. Pray for us.”
Charlie Manuel, Phillies Manager


Originally hired as an usherette for the 1980 season, my work with The Phillies ranged from ballgirl to market researcher to fan liaison. I sold the most season tickets in 1985 and attended over 600 games, playoffs, World Series, five All-Star Games, and fifteen parks while with the club.

The Phillies won their first World Series my rookie year and the National League Championship in 1983. Then things got sticky, so I split after selling all those tickets...

Years passed, and the Phillies had had only two winning seasons since my departure.

I was home for a visit and read Chollie's desperate quote in the Inky. It was then I decided I had to write this book to lift the curse off my old team. 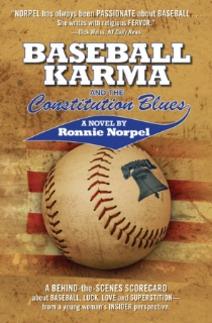 for the same price!  (Shipping included.)